Policy borrowing is a major topic in field of comparative education. On the surface the idea is relatively simple: one group of policy makers borrow the ideas of other policy makers to improve a system of education. This usually is described as borrowing “best practices.” But the work of many comparative education researchers has shown that who borrows what policy and for what reason is much more complex. We cannot, as Michael Sadler warned in 1900, assume a picked flower in one part of the world will blossom in soil at home. 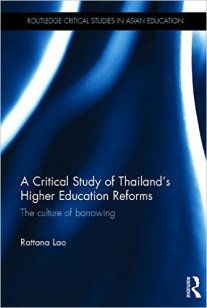 My guest today, Rattanna Lao, dives head first into the debates on policy borrowing in her new book, A Critical Study of Thailand’s Higher Education Reforms: The Culture of Borrowing, which was published earlier this year by Routledge.

She argues that although the Thai state has always been an active borrower of western ideas, the perseverance of a ‘Thai-ness’ discourse has often been used to suggest its so-called independence and idiosyncrasy.

Rattana Lao received a doctorate in Comparative and International Education from Teachers College, Columbia University and is currently a lecturer at Pridi Banomyong International College, Thammasat University in Thailand.